You walk through this desolate wasteland of ice covered lakes and rusted out airplanes as if you were born this day. It’s quiet – dead quiet – until suddenly you hear a rustling sound of something alien ahead. As if it were muscle memory you reach for your primary weapon, a modest rifle. Staring down the scope of your armament, you see a few Fallen scouting the area for anything that moves.

You haven’t been spotted… yet.

You inhale a breath of uncertainty and as you slowly exhale you squeeze the trigger, immediately dropping the first two Fallen. As you reload and take aim at the remaining stragglers you realize they’ve vanished. Most likely retreating to fight another day.

Several Fallen are now running after you and hunting you down like they have no other purpose on this dead rock we once called home.

It’s quiet again and you cautiously work your way towards the expired Fallen to collect whatever treasures they may have dropped. As you collect your earnings from your dead foes you are surprised by a well placed grenade thrown at your feet by flanking reinforcements. The blast knocks you off guard and drops your shield. Several Fallen are now running after you and hunting you down like they have no other purpose on this dead rock we once called home.

As you are backed against a rusted old helicopter, the only solace you take away from this situation is knowing no enemies can be behind you. You reach for your sidearm shotgun and start surgically removing the heads of the hoard of Fallen rushing your way.

Only one Fallen remains but this one’s different from the previous bullet sponges you just decimated and he’s moving your way. Feeling lucky, you pull the trigger of you boom stick only to hear the sad sound of an empty chamber.

Both you and the Fallen engage in a futile fist fight of shield dropping and ironic dancing. Refusing to switch to your primary weapon, you realize you have one last trick up your sleeve. The next punch you land turns the Fallen into a glowing mess of embers and atoms dissipating at an unexpected rate. You breathe a sigh of relief and thank the gods you chose this character class.

You once again collect the treasures of the dead, like any guardian would do in your position, and finally mount your hover bike. As you speed away with a shit eating grin on your face, you wonder what else you can kill tonight.

Update: I wanted to post some beautiful scenery from my play through of Destiny’s Alpha. It’s truly a beautiful game and the sitting screenshots aren’t indicative of Destiny’s action. I just didn’t think to take many action shots because I was having too much fun! 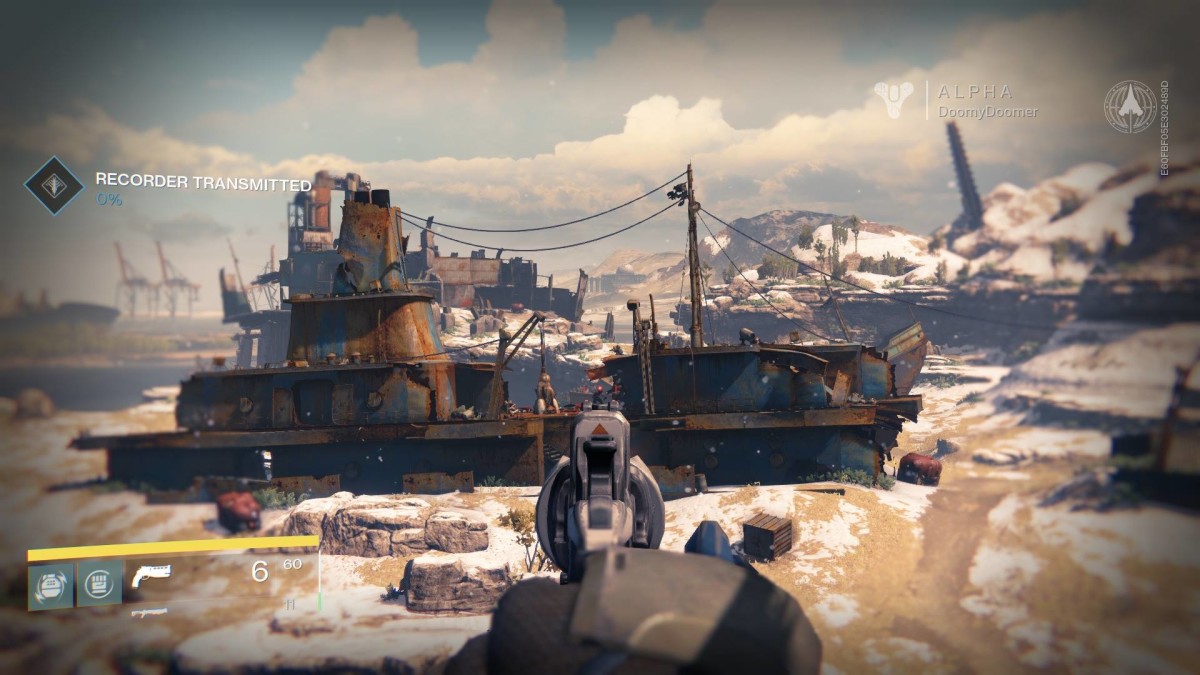